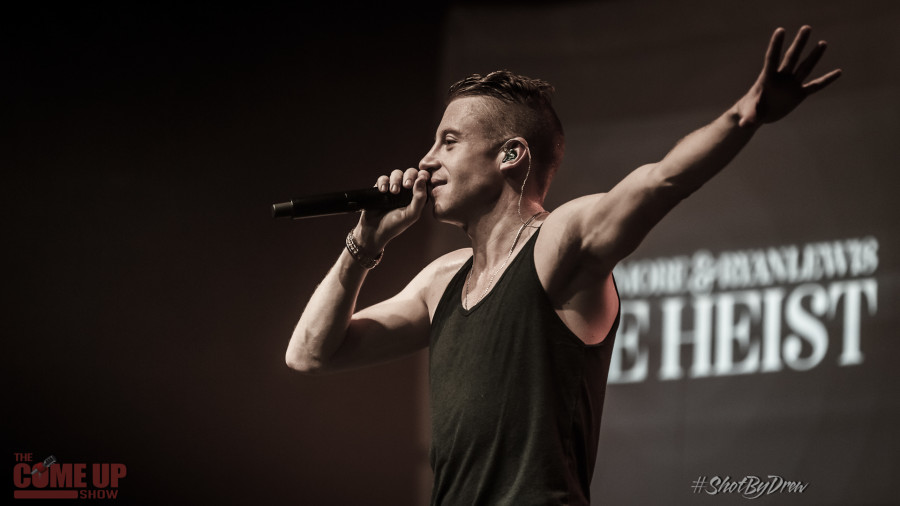 Managing Editor, Meghan Laakso, analyzes the ways Macklemore uses his voice to touch on the real issues in America.

Macklemore and the Real Issues

Macklemore: an Activist Among the Millennials 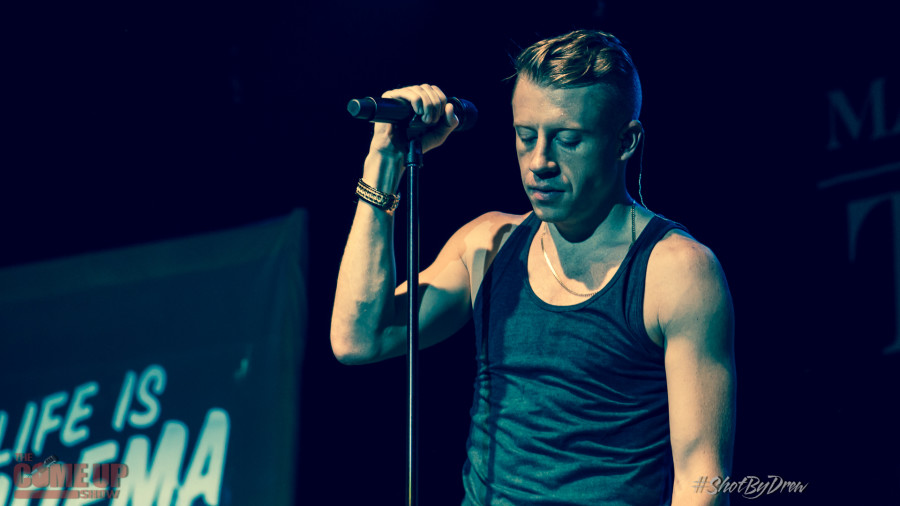 Managing Editor, Meghan Laakso, captures how important Macklemore is to her generation.

My generation is often chastised for being materialistic and ignorant of the problems in the world. Technology and social media have ‘taken our attention away from what’s really important in life’. I call bull crap. My generation is actually much more aware of social issues and accepting of diverse situations than those that fall before us. It’s through social media and technology that our awareness is created. We are consistently exposed to artists, musicians, and authors who use their talent to be activists. Some stand out more than others. To me, the most important musical activist is the Seattle native, Ben Haggerty, or, as most people know him, Macklemore.

Macklemore became big in 2012 when he released his first song, Thrift Shop. The fun natured song became a household favorite, the catchy beat and unusual topic of thrift shopping lured in thousands. For a while, as Macklemore built his image, he kept releasing catchy, fun songs. But, in July after his debut, Macklemore dropped a single that took a political, controversial stand.

His main point is that people can’t change who they are and that love is love.”

The song, Same Love, shocked his listeners due to it’s serious pro-stance on Gay Love. In the song, Macklemore talks about how, when he was a little boy, certain stereotypes made him think he was gay. Later, he went on to discuss how certain political and religious leaders influenced the fight against marriage equality. His main point is that people can’t change who they are and that love is love.

At the time of Same Love’s release, gay marriage was illegal in most states, even in Washington. Washington politicians began to discuss marriage equality in February of 2012. But the lyrics to Macklemore’s song created a buzz that led to more serious conversation among the political representatives. In December of 2012, five months after Same Love was released, Gay Marriage was legalized in Washington state.

It is understandable that Macklemore wasn’t the sole reason for the legalization to happen. The fight was already in the process before the song was released. But I believe it is reasonable to think that Same Love  gave the battle the push it needed to become Washington legislation.

Macklemore is also very involved in philanthropy work. One is the 30/30 project which works to build lasting healthcare facilities all around the world. He is an important force in the Seattle ‘We Day’ conference that is dedicated to empowering youth. Macklemore also shares his story on his past with drug abuse for the Half of Us Initiative which is an organization that helps the youth with any problem they may have. And, every now and then, Macklemore will head over to Seattle Children’s Hospital with his good friend, Russell Wilson. There, the two visit sick kids and give them an extra boost of strength to keep fighting through whatever disease they may have. Macklemore’s dedication to the youth of America has made him a major icon with my generation. Not only has he inspired many to help to others, but he demonstrates strength and personal respect.

Not only has he inspired many to help to others, but he demonstrates strength and personal respect.”

Macklemore spent his twenties trying to battle his addictions and destructive lifestyle. In 2008, he admitted himself into rehab and then celebrated three years of sobriety before having a brief relapse in 2011 which he quickly bounced out of. He wrote the song Starting Over to share his experience with being in the public eye while trying to maintain sobriety.  Macklemore was not only able to get sober, but he is now acting as a role model for those seeking help. In the song, he says the lyrics:

Macklemore has taken control of his life and is using his experience to help others. But he has also used this control to take on new responsibilities away from music. In May of 2015, Macklemore became the father of a beautiful baby girl named Sloane. With the help of Ed Sheeran, Macklemore crafted a song dedicated to his daughter called Growing Up where he gives advice to Sloane for when she gets older.

Everything Macklemore is screams role model. His philanthropy work, his positive pro-choice/ pro-self stance, his inspiring lyrics, and his dedication to equality are all things that have influenced and helped my generation.

By using social media and entertainment, his work and messages have educated hundreds of youth as well as encouraged them to be open and kind to those of different race, gender, sexuality, religion, and opinion.

The generations before mine scold us for being way too invested in social media. They frown at us for looking at life through the lens of an iPhone. But what they don’t know is that we are the generation of kindness and equality. And we have Macklemore to thank for being a large influence in our movement. 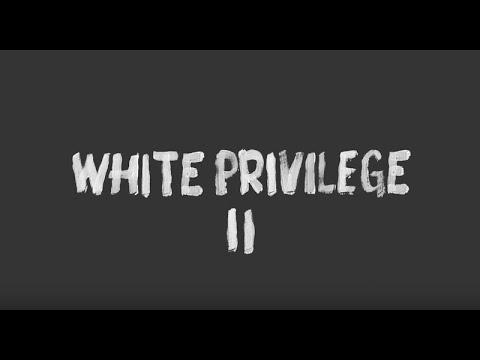 Managing Editor, Meghan Laakso, considers the issue of discrimination and racism against the African American community.

Sitting down to write this, I had no idea where to start. Macklemore’s song White Privilege II inspired me to say something. But I find myself in the same position that Macklemore points out. How do I, a white Christian girl from a middle class family and a primarily white, upper class town, establish any credibility when talking about Black Rights and how Black Lives Matter. Well, I can’t. I have never experienced injustice or discrimination because of, well, anything. The plausibility of my opinion is little to none.

Even though I have never experienced the injustice directed against Black people, I do have two eyes and two ears, that see and hear the blatant discrimination all over the media. I see and hear about police brutality and Black Lives Matter protests. I see and hear these humans being treated differently than me and it makes my chest hurt. But I also have a mouth, and it has not spoken loud enough because I keep telling myself that this isn’t my fight. Well, it is. I believe that every person should be treated with the same respect and love and forgiveness. A lyric in Macklemore’s song quotes the late Martin Luther King Jr.– injustice anywhere is still injustice everywhere. That couldn’t be more true.

White Privilege II came out on January 22, 2016 to bring the attention back to race inequality and police brutality. After a good year and a half of hearing about Michael Brown and Ferguson, it was obvious that the white community was done paying attention, as was pretty much every police department in the United States.

Soon, after talk of Ferguson had died down some, more and more cases of police brutality against Black people came into play. But the primarily white media didn’t give many of the cases a second of air time.

It is appalling to me how, even after videos have been released of white police officers blatantly abusing Black victims, much of the white community still has the need to say things like ‘The police officer was just defending himself’ or ‘He thought the guy had a weapon’ and even ‘The guy had it coming’. No! None of that is okay! None of those complacent and racist thoughts even touch on the idea of someone’s humanity being breached. A man has died! A woman has died! A child has died! Someone who lives and breathes just like you and me has died at the hands of a professional primarily responsible for protecting the common good- not just the common race.

White Privilege II has not been received well by most people. Many white critics have listened to the song and then called it ‘a mess’ and ‘unorganized’ as well as a ‘political stance with no artistry’. Some Black activists weren’t too thrilled either, saying ‘You’re trying to help, but honestly you’re not. We can speak for ourselves. Pass the mic’ (Gyasi Ross).

Someone who lives and breathes just like you and me has died at the hands of a professional primarily responsible for protecting the common good- not just the common race.”

However, what many people don’t know is that Macklemore and Ryan Lewis worked very closely with the Black Lives Matter organization to craft this masterpiece. Black Lives Matter encouraged Macklemore to write a song that initiates conversation. The organization happily acknowledges that the song isn’t for Black people. It’s for a white audience, and its goal is to get the listener first to think and then to have the difficult race conversations. Because of this purpose, the song is free on iTunes. There is no profit being made – no money is going into Macklemore’s pocket whatsoever.

While researching reviews from both communities, I found myself getting more and more confused about my own position and how I interpreted Macklemore’s song. It was then that I realized just how naive I am, just how unaware I am of the feelings of the Black community. After taking time to step back and mull over everything, I came up with one question- What can white people do to help?

To me, as someone watching from the outside, it seems like no one can win. Not only is there a horrid discrimination against Black People, but it also seems like the White people who want to help get knocked down. It’s assumed that every white person is racist and that our ‘help’ will only hurt. I see this a lot on Tumblr – people pointing fingers at others, saying that white people grew up racist- no ifs, ands, or buts about it.

This generalization angers me, just like the generalization against Black People does. If every single white person is already deemed racist, how can anything change? Don’t get me wrong, I’m not saying that the fault is on the Black people at all, but what I’m saying is that we need to work together to make this right. Any assumptions toward either race need to dissipate.  Change will not happen unless there is support going both ways.

So educate me. Tell me what I can do to help make a difference. Tell me how I can help stimulate change. I want to be involved- I want justice and equality to come to the African American race.

But, let’s be real, I am just a white, Christian girl from the upper class, non-diverse town of Gig Harbor. Who am I to talk?