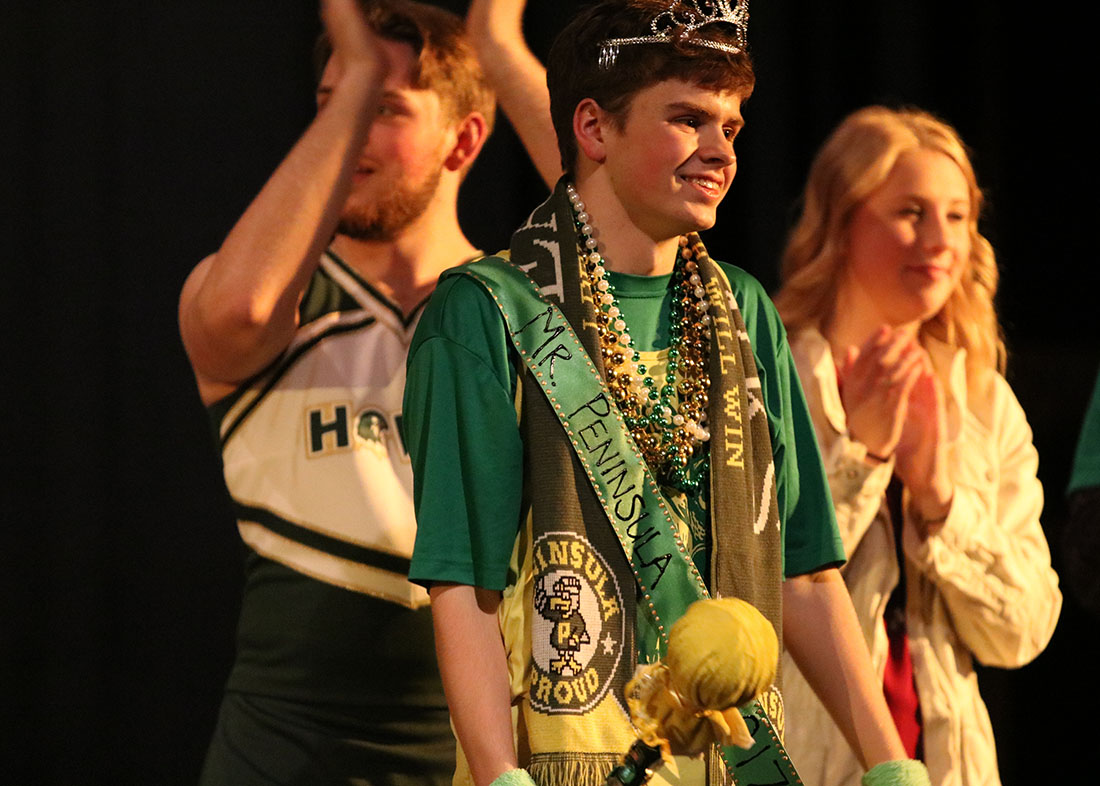 Tyler Sommer decked out in his Mr. Peninsula attire. 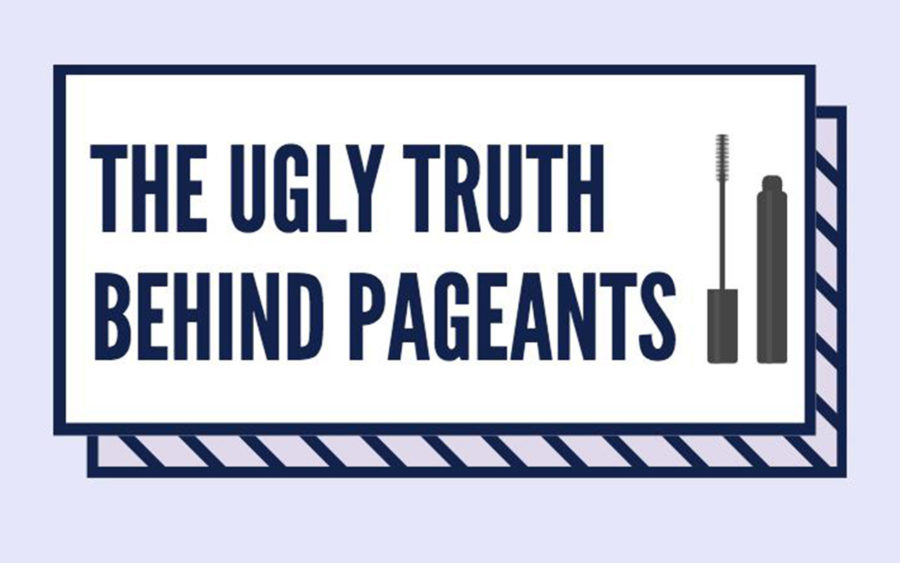 A new perspective on the Mr. Peninsula pageant.

Every year, in the Milton Boyd Auditorium, an audience of students, parents, and community leaders alike watch as a handful of senior boys are pitted against one another in hopes for a sparkly crown and scepter. The contest, named Mr. Peninsula, mimics traditional female pageants by highlighting formal wear, beachwear, and talent.

Emma Taylor, who considers Mr. Peninsula to be a “mask over a different type of oppression”, would like to see a change in Peninsula High School.

“I think that it’s a cute way to raise money for prom but I don’t necessarily think it’s progressive as it could be,” said Taylor.

The third annual show, which took place this month, is responsible for raising funds for the Senior Class. For weeks, the Big Night was hyped up; excited chatter could be heard throughout the halls. Of course, Mr. Peninsula is set up to be a “fun” and “student-orientated” tradition, but real-life pageants are far from harmless, hurting women more than helping.

“Its not itself harmful but the ideas behind it are what make it cringey,” Taylor said.

Beauty pageants award based on appearance; the more “ideal” a contestant is, the more likely she will win. This construed sense of validation only sexualizes women (especially in swimwear) as their looks upstage their actual achievements and talents.There is a reason why male beauty pageants are not a thing: Our society doesn’t orbit a man around his appearance as much as it does around for women.

“If women are sexualized, why do men get to make light of it?” Taylor asks.

“The system celebrates masculinity,” but it also defines femininity as a joke. ‘Running like a girl’, ‘screaming like a girl’, ‘throwing like a girl’, are all snide comments that are intended to insinuate laughter. In our culture, you don’t want to be called a “girl” or be associated with any of those phrases… it’s become an insult. Taylor, among many others, would like to see a change in that attitude; as a community, we can advance from Mr. Peninsula “entertainment” to something more enlightened.

Although PHS promotes character and talent-based recognition, Taylor would like to see more of that commendation. She hopes we can model our future productions more like the talent show, where students can display their passions in an inclusionary environment free from “weird” and “outdated” repressions.

“I would like to see a different type [of fundraiser], like a scholarship pageant,” Taylor said. She’s supportive of an awards show, in lieu of Mr. Peninsula, that is centered around the accomplishments of PHS scholars. The Outlook’s PHS Top Twenty, an annual recognition project, could also serve as a way to, as Taylor put it, “celebrate people for all the things they can do.” This way, we’re promoting positive messages without making fun of real societal problems.

Instead of boys playing volleyball in short shorts and crop-tops, and girls asking boys to a school dance in the “attempt to re-empower women, who have been disempowered in the first place,” Peninsula should grow out of the system. Taylor understands how these types of things, like Mr. Peninsula, can be surface-level funny, but the underlying roots of repression turn her off.

“Just because you reverse a system that targets women, like beauty pageant, that doesn’t make it okay,” Taylor said. “Because you do it to men doesn’t mean it’s ever erased.”

Read more about this year’s Mr. Peninsula here and here.

In Reply To “Mr. Peninsula: The Ugly Truth About Pageants” 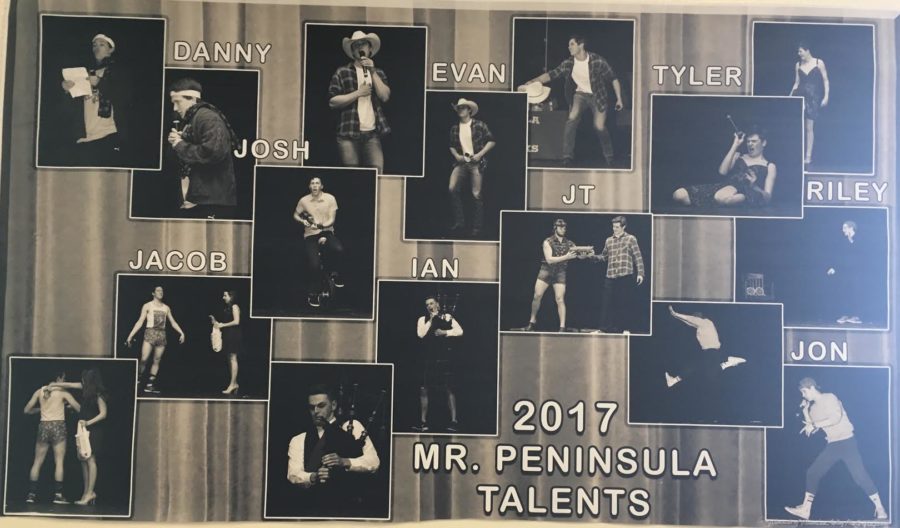 *Disclaimer: I absolutely love everyone who was involved in writing and creating “Mr. Peninsula: The Ugly Truth Behind Pageants” and really admire that PHS Outlook gives us all the platform to write our own opinion pieces. This is just my opinion, reacting to another opinion I highly respect.*

When I read something I don’t understand completely,  my first inclination is to research about the topic in order to either validate my thoughts or clear up what I was priorly confused about so that their point might make more sense to me. So when I read “Mr. Peninsula: The Ugly Truth Behind Pageants”, an article on the PHS Outlook, and saw that a PHS senior felt that “Mr. Peninsula can be surface-level funny,” but thought there were “underlying roots of repression”, I felt conflicted and immediately went to the dictionary to look up the true definition of “repression”.

The definition of repression:

“the action of subduing someone or something by force”

“the restraint, prevention, or inhibition of a feeling…”

Although the article was written in good light trying to bring attention to the sexualization of women in modern day society, as a girl myself, I finished reading it feeling extremely puzzled. As I was also there to watch and participate in Mr. Peninsula from the beginning to the end, I truly tried to think of a time the light hearted humor presented by the senior boys, or even just the idea of the pageant itself, promoted any sense of “restraining, subduing, or inhibition” to my gender.

The article stated that “In our culture, you don’t want to be called a ‘girl’” or even be told that you “throw like a girl” because it has “become an insult”. The statements in this article insinuate that pageants are a major part of the troubling modern day “culture” that promotes these feelings.  Because I’m not a pageant girl myself, I got ahold of former 2016 Miss Teen Montana, Jami Forseth, and asked her if she felt like all the big time pageants she had been a part of led her to believe that she was promoting the “mask over a different type of oppression” the article was speaking about.

Jami said,  “If anything, pageants nowadays are empowering women. The reason behind wearing evening gowns is to show off grace and the beauty of femininity. The swimsuit portion is to show off a girl’s confidence, regardless of the her physical appearance. The interview/onstage question (worth 60% of the overall score) is meant to show a woman’s true intelligence and poise as she answers challenging on the spot questions.”

A great example of how pageants are empowering women is Deshauna Barber, a Captain in the US Army and our current Miss USA. Barber uses her platform to promote equality among all ethnicities,  giving women all around the world the confidence to stand up for what they believe in. Other examples are Halima Aden, the first Muslim woman to compete in pageants while wearing her hijab, or Chelsea Hardin, a hardworking D1 volleyball player and Miss Hawaii 2016. Jami brings up the fact that a lot of these women use their platform to create their own volunteering organizations and movements that are actually crucial to the “progressive” society pageant naysayers want.

Because so many of these women competing are full time students or D1 athletes, Jami says that pageants actually liberate women, making statements such as “You throw like a girl”  nothing but an incredible compliment. “Those who still think that pageants are nothing but degrading and oppressive watch way too much Toddlers in Tiaras” Jami jokes.

After all of this, my question is how are “boys playing volleyball in short shorts and crop-tops”, making fun of a deeper form of “repression”.  What is so wrong with these boys wearing short shorts, or competing in pageants? If women should be allowed to do anything a man does, shouldn’t a man be able to do whatever a woman does as well? If this isn’t allowed, that to me sounds like a very legitimate restraint; actual “repression” in it’s truest form. (The very thing the article’s point of view is fighting against). Anyone who watched Mr. Peninsula knows that the legitimate heart and motive behind the show was nothing like Toddlers in Tiaras. But if Mr. Peninsula mirrored any aspect of an actual pageant, let it be the imitation of the empowerment modern day pageants are beginning to promote. Let Mr. Peninsula be known as the night that allowed boys of all different groups to let go of their inhibition, trying their hardest to do nothing but just make people laugh.

To the senior boys of 2017 who put on an incredibly fun and exciting show for the rest of us to watch and enjoy, thank you for such a great memory.