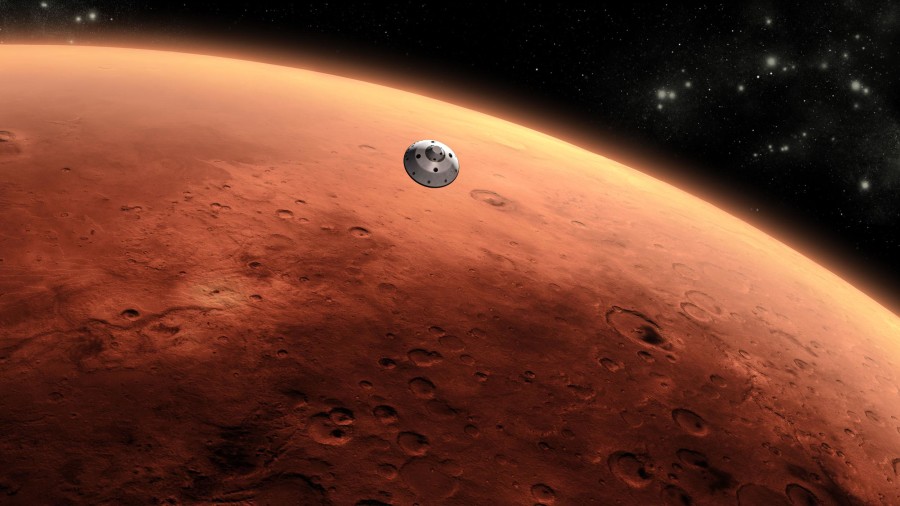 Editor in Chief, Lucy Arnold, captures the brilliant work of Andy Weir in a review of both the novel and feature film.

The Martian rockets past all expectations!

The Martian is Well Worth the Read 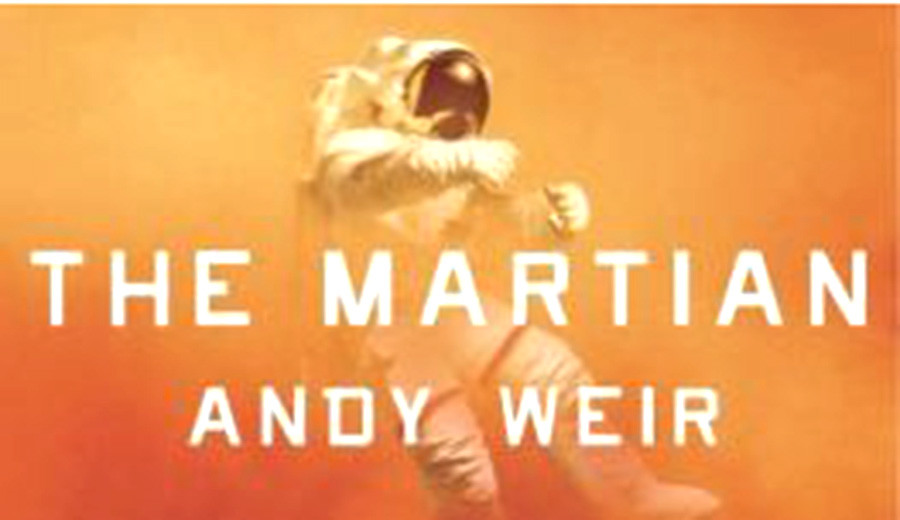 Editor in Chief, Lucy Arnold, reviews the incredible story of The Martian by Andy Weir.

Imagine that you are stranded on a barren, desolate wasteland of a planet. The dustlike soil cannot support plantlife; the terrain is rocky, unpredictable, and mottled with giant craters;   temperatures are bone-chillingly cold; and frequent dust storms whip across the landscape, wreaking havoc. Everyone on earth is unaware that you are struggling to survive in such a hopeless and hostile environment because NASA, the media, and your mission crewmates all believe you to be dead. You are utterly alone with close to zero chance of rescue.

What would you do?

Most people would give up. They would dwell on the 99 percent chance that no help will come and spiral into despondency and depression, perhaps even ending their own lives so that the suffering is not prolonged.

It is one of the most thrilling reads that I have encountered in a long time.”

Botanist, mechanical engineer, astronaut, and self-proclaimed dork Mark Watney is not like most people. When faced with the disastrously grim scenario outlined above, he employs all of his creativity, ingenuity, determination, and wit to survive on Mars and to contact Earth for help. The events that follow are chronicled in Andy Weir’s The Martian, a gripping page-turner that has been adapted into a highly anticipated film.

Whether you plan to see The Martian in theaters or not, I highly recommend that you give the book a try. It is one of the most thrilling reads that I have encountered in a long time, but it is also a stirring testament to the power of the individual will to survive and to the great lengths that people take to help others.

The book’s narrative sequence switches between Watney’s first-person accounts of his experiences and third person descriptions of events surrounding his rescue. Watney’s narration is all part of a log that he continues to compile so that people on earth will have record of his times on Mars after he dies. The tone of the log becomes increasingly optimistic as Watney realizes that he might be rescued afterall.

But how does a person get stranded on Mars in the first place? The Martian takes place some time in the future, when NASA and other organizations have the funding and technology necessary to launch ridiculously expensive space exploration projects. Watney is the fifth member of the six-person crew of Ares 3, the third installment of a six-mission project that seeks to learn more about Mars.

Six sols (Martian days) into the 31 sol mission, a severe dust storm comes to the Ares 3 mission site and forces Watney’s crew to end the mission early. The six crew members get into their space suits and struggle their way toward the Mars Ascension Vehicle (MAV), the relatively fragile device that is the crew’s only way back to the Hermes, the ship back to Earth. On the way to the MAV, Watney is seemingly impaled by a pole, and the impact carries him far enough from his crewmates that they cannot find him. Misleading data readings from his space suit (accessed from the MAV) convince them that he is dead, so Watney’s five colleagues ascend to Hermes and to space without him.

The Martian is overall an outstanding read.”

Watney awakens in the middle of the dry, lifeless Martian desert. He finds that he is completely alone on a very large, scarcely-explored, and unforgiving planet. He has enough food to last for at least several months, but not for the four or more years that will pass before Ares 4 and potential rescue come to Mars. His only hope of communicating with Earth is to make dramatic overland journeys to former and future mission sites stocked with communications equipment. He must also maintain the Hab, a large shelter with conditions preserved specially for human life.

Against remarkable odds, Watney’s quest for survival begins. Readers are taken on a riveting adventure as Watney manages to grow food, communicate with Earth, travel many kilometers of rough Martian terrain, and endure numerous hardships and threats to his life. Watney’s journey is all the more enjoyable because he faces every challenge with great humor, resourcefulness, and ingenuity. His experiences are even slightly educational because the book demonstrates a level of scientific accuracy that is often absent from science fiction novels.

While Watney works to survive, his crewmates, NASA, the media, and even the space programs of foreign countries launch massive efforts to bring him home once they realize that he is alive and stranded on Mars. People from all different backgrounds come together to figure out how to keep the lone astronaut alive and how to rescue him. In the end, Watney’s crewmates make the life-threatening decision to execute the rescue efforts themselves. All of this contributes to a climax that had me on the edge of my seat.

The adventure will thrill you, and you just might gain some hope for humanity in the process.”

Though all of the characters involved in the rescue effort are very dedicated to saving Watney, they occasionally touch on the following question: why go to such great, expensive, and dangerous lengths to save a single life? Watney answers this question at the end of the book, when his fate is certain. “Every human being has a basic instinct to help each other out…If a hiker gets lost in the mountains, people will coordinate a search. If an earthquake levels a city, people all over the world will send emergency supplies. This is so fundamentally human that it’s found in every culture without exception” (page 369).

The Martian is overall an outstanding read. It demonstrates the perfect balance of humor, excitement, and humanity to be both touching and highly entertaining. Especially as the plotline progressed, I could not put the book down until I learned Watney’s fate. If you need something to read, you should grab this book and spend some time on Mars with Mark Watney. The adventure will thrill you, and you just might gain some hope for humanity in the process.

The Martian Is Out of this World

A scene from the feature film, The Martian.

On Friday, October 2, Ridley Scott’s highly anticipated film adaptation of Andy Weir’s bestselling novel, The Martian, landed in theaters. Four days later, I joined the ranks of bibliophiles, science nerds, space fans, film jocks, and numerous others who have flooded into theaters to experience this hyped-up Mars-Western. I am very glad that I did.

Before I launch into my extensive praise of this film, I must admit that I experienced several minor misgivings as I sat in the shadowy theater, waiting for the commercials to end and for the the film to start. As previews and ads blurred across the screen, I reflected on the sad fact that so many bestseller-based movies struggle to fulfill high-pre-release expectations.

For whatever reason, these films seem to fall flat or short once they hit theaters, even though they boast outstanding casts, huge budgets, breathtaking special effects, and incredible plot lines. It seems that with almost all movies based on books, viewers go to theaters with a very clear idea of what the action should look like, and at least some of them leave disappointed because the cinematography can’t live up to the images that played through their heads as they read the book.

Scott’s epic space movie is a noteworthy exception to this conundrum; it possesses the great cast, budget, special effects, and storyline present in so many other book-based blockbusters, but it also surpassed my every expectation because it portrays human cooperation and the will to survive so superbly. The Martian’s very strong showing in theaters demonstrates that countless others agree with me when I say that this is one of the greatest movies to hit cinemas in years.

The main premise of the film is fairly simple (and no, it is not just another Interstellar). Mark Watney is an astronaut member of the Ares 3 expedition on Mars when his five crewmates accidentally leave him behind. Facing a long period of solitude and incredible odds, Watney must find a way to survive on the Red Planet by planting food and making contact with Earth. Everything gets especially interesting when NASA realizes that the Ares 3 botanist is still alive and launches rescue efforts.

It surpassed my every expectation because it portrays human cooperation and the will to survive so superbly.”

In my opinion, the best part of The Martian is that it deals with very serious subject matter in an uplifting and hilarious way. Though viewers spend over two hours in the head of a man who is stranded on an extremely large and desolate planet for an extended period of time, they leave theaters feeling far from alone. The film is so satisfying and inspiring because of its premise: the world’s people come together to save one person deserted millions of miles away.

This positive experience would not be possible without the remarkably talented host of actors and actresses who bring Weir’s novel to life. Matt Damon arguably gives his best performance in years as the brilliantly goofy astronaut Mark Watney, a man who faces countless challenges alone on Mars with a can-do attitude and thriving sense of humor.

Speaking of comedic charm, this review would not be complete if I didn’t acknowledge that humor makes The Martian. The film is a lively celebration of intelligent nerd culture from start to finish, for Watney, his Ares 3 crewmates, and almost all of the NASA personnel who work to bring him home have hilarious quirks.

The film is a lively celebration of intelligent nerd culture from start to finish.”

Case in point: beneath her stoic exterior and much to Watney’s chagrin, Commander Lewis is a diehard disco fan. Johanssen devoutly watches 70’s sitcoms in her spare time. The mission chemist, Alex Vogel, thinks nothing of making a sugar-based bomb if circumstances require it. NASA astrophysicist Rich Purnell names Watney’s rescue plan “Project Elrond” after the solemn elf council in Lord of the Rings. Annie Montrose’s exasperated reaction? “I hate you guys.”

Though all of these characters are hilarious, none are funnier than Mark Watney. Especially memorable moments include his declarations that Mars will come to “fear his botany powers” and that he is the “best botanist on the planet.” At another point, his triumphant “In your face, Neil Armstrong!” caused my theater to resound with laughter. Even as he hurtles through space in a gutted ascent vehicle and suddenly faces the horrifying possibility that his crew might be unable to pick him up, Watney remains upbeat, begging Commander Lewis to let him release pressure from his space suit so that he can reach his trip home by “being Ironman.”

In short, The Martian is a cinematic treasure. It keeps you on the edge of your seat and engrossed in the action, but it also keeps you laughing steadily. The story, acting, screenplay, and special effects are spot-on. Refreshingly, the filmmakers decided to keep the plot of the film very close to that of the book, bringing all of the best elements of Weir’s debut novel to the big screen. Most of all, The Martian shines because of the beauty of its universal message: no matter who we are, where we are, or where we come from, all people are connected by an instinct to help each other. If doing so means traveling over a hundred million miles and committing the entire planet to support and rescue efforts, so be it.