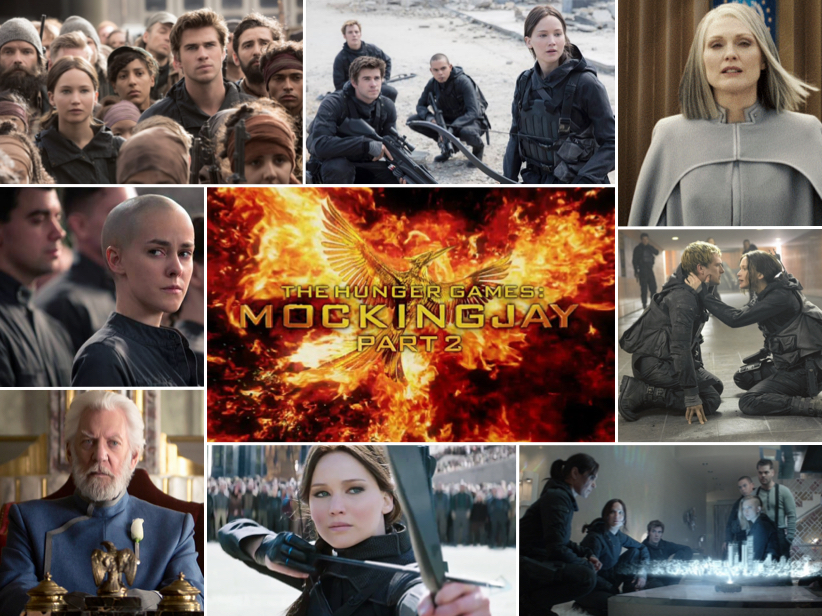 When it comes to war, the Hunger Games makes it clear that there are no rules and that the end result often justifies the means. Mockingjay: Part 2 brings the Hunger Games movie franchise to an explosive end, just as the book did. On November 20th, fans of the films and books waited in anticipation to see if the film lived up to Suzanne Collins’ book and if it did justice to conclude a series that so many people came to love.

The final installment of the Hunger Games promptly picks up where its predecessor left off. Katniss (Jennifer Lawrence) and District Thirteen have rescued Peeta (Josh Hutcherson) from the Capitol. However, unbenounced to them, Peeta’s captors have “hijacked” him by altering his memories so that he associates false negative memories with Katniss. When Mockingjay: Part 1 ended, Peeta had just made an attempt on Katniss’ life and was being restrained, mental institution style.

Collins did a great job depicting the realities of it’s mental effects on people. ”

While the first part of Mockingjay generally lacked excitement, Part 2 has enough suspense and action to make up for both films. The majority of the film consists of the rebellion’s siege on District Two and eventually, on the Capitol. As a result, there are quite a few battle scenes within the crumbled ruins of a once grand city, all with unique Hunger Games-esque twists.

The movie is filled with plenty of fighting, but it still does an exceptional job at refraining from being all brawn and no emotion. Because Mockingjay centers heavily on war, Collins did a great job depicting the realities of it’s mental effects on people. Right before an explosive scene, the viewer may get a close up on Katniss or Peeta waging his or her own mental war.

Though the Hunger Games is a young adult series, Mockingjay manages to cleverly weave in dialogue on the harsh realities of modern warfare. The protagonist, Katniss, shows clear signs of Post Traumatic Stress Disorder (PTSD), for she frequently experiences flashbacks and panic induced by places she connects to negative memories. In addition, Peeta’s mental state alludes to the real life effects of PTSD. As discovered in the previous installment of Mockingjay, Peeta Mellark was “hijacked”, and he now confuses fake memories with real ones – a false reality. PTSD sufferers can sometimes create memories around a traumatic event and then be unable to decipher them from reality.

Mockingjay: Part 2 is the most brutal of the Hunger Games movies, and in a few instances, it actually surpasses the book in foulness. In addition to the emotional and mental tolls you see the characters struggling with, the unprecedented actions of war are startling, especially since the franchise was intended for “young adults.” To read about violence is one thing; to actually watch it before your very eyes is another thing altogether.

To read about violence is one thing; to actually watch it before your very eyes is another thing altogether.”

Rebels tread through the Capitol in fear of landmine type devices that, when triggered, unleash miscellaneous horrors. Civilians are deliberately put in the crossfire between the two opposing sides. To top it off, the director keeps the camera unwavering as all of these horrors happen, catching every intimate, terrifying moment. Throughout the film Collins and the filmmakers pose the following question: even if you try, how can you be ethical when it comes to war?

While both the Mockingjay book and movie have satisfying conclusions to wrap up the series, viewers are left doubting whether it was the fairytale happy ending that we are accustomed to. From the outside, the Hunger Games seems just like any of the other dystopian series that are coming into mass production today. However, when you think about it, the Hunger Games is much more profound; it draws elements from today’s world affairs and reminds us of the real costs of war, both on the battlefield and years after.